Mi 10 Launch date, Pre-order, specifications: Mi India has finally revealed the launch date of Mi 10 in India. As per Xiaomi the Mi-Series will debut on 31st march, Xiaomi did announced this amazing news through it’s social media channels in the country. Earlier it was expected that Mi 10 and Mi 10 Pro to be launched in India but the fresh teaser suggests only the Mi 10 will be introduced in the country. 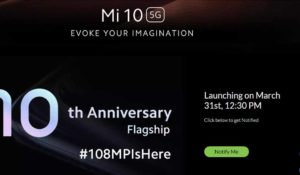 Xiaomi will conduct the livestream on 12:30pm IST to highlight the launch and media invites has already been sent for the same. Xiaomi did created a dedicated microsite to create a buzz in respect to the offerings.  Microsite reveals that the amazing smartphone will be launched on 31st March at 12:30pm. If you want to get notified for the same you can register yourself.

Mi 10 price is yet to be revealed but we assume it will be slightly costly in comparison to the launch price in China. Manu Kumar Jain did confirmed that there will be a different pricing direct import, higher GST, and depreciating rupee. Mi 10 was launched in China with an introductory price of CNY 3,999 (roughly Rs. 42,400), we can assume we need to shed more than 45,000 for the same. Well, we just need to wait for the price declaration

You can pre-order Mi 10 starting 3:00pm IST on March 31. As per Xiaomi, Customers pre-ordering the Mi 10 in India between March 31 and April 7 will receive an instant discount of Rs. 2,500 on Axis Bank credit cards and EMI transactions. Similarly, there will be an instant discount of Rs. 2,000 on purchases made through Axis Bank debit cards and EMI transactions.

If we talk about RAM and Internal Storage, it tops with up to 12GB of RAM and up to 256GB of Onboard storage. Camera is one of the main USP of the device, it bears quad camera set-up at the back comprising of 108MP + 13MP + 2MP + 2 MP rear cameras and 20 MP snapper at the front.